Fred Stone was one of America’s most versatile and talented of Broadway’s colorful entertainers. Audiences quickly discovered he could do anything and everything, from tightrope walking and acrobatics to song-and-dance, musical comedies, and straight drama. This work chronicles his extraordinary life and career. He was born in a log cabin August 19, 1873, in Valmont, Colorado, to a family that was part of the covered-wagon migration into the virtually unknown West. He joined a traveling circus at age 11 and two years later, joined a different one as a self-taught tightrope walker. During his teens, Stone performed on the variety stage, and at age 22, met Dave Montgomery, with whom he performed for over twenty years, including Broadway musicals, notably as the scarecrow in The Wizard of Oz. After Montgomery’s tragic death in 1917, Stone continued to perform and shared his continued success with his closest friend Will Rogers, and Annie Oakley, Broadway producer Charles Dillingham, Western artists Charles Russell and Ed Borein, and author Rex Beach. Stone appeared in some 18 movies, from 1918 to 1940, including such western classics as The Westerner and Trail of the Lonesome Pine. In 1950, he retired from show business and during the last years of his life suffered from increasing blindness and heart trouble. He died at his Los Angeles home in 1959.

The late Armond Fields was a social historian specializing in American popular theater. The author of numerous books about vaudeville and other early theater figures, he lived in Culver City, California. 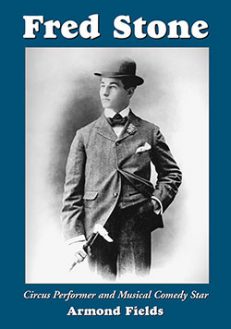