The Last Great Monarchs of Austria-Hungary

In 1848, an 18-year-old boy assumed the throne of Austria, one of the most powerful countries in Europe. He would be its last significant emperor, the only monarch to serve two countries, and the last cogent head of the prestigious Habsburg dynasty. Emperor Franz Joseph’s reign was marked by revolutions, often fueled by rising liberalism and nationalism, and wars orchestrated by conquering architects such as Napoleon, Metternich, and Bismarck. This book gives attention to these political and cultural events, but it is moreover a biography of Emperor Franz Joseph and his enigmatic wife, Empress Elisabeth.

The late Karen Owens was a college professor and a visiting professor at several universities in England. She lived in Winter Park, Florida. 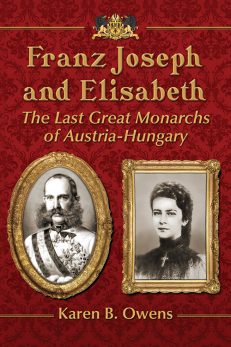 You're viewing: Franz Joseph and Elisabeth $39.95
Add to cart