The Life and Films of a Troubled Star

Previous biographies of American actress Frances Farmer (1913–1970) have downplayed her professional achievements to emphasize her turbulent personal life, including several police arrests and repeated confinements in a state mental hospital. By focusing upon her acting career, this book endeavors to restore her position as a significant Hollywood player of the 1930s, ’40s and ’50s. An analysis of her film, radio and television work is offered, as well as assessments of the three Frances Farmer biopics and the documentaries in which she is featured. Each of her 16 films receives a chapter-length discussion. A very lengthy biographical chapter is included.

Peter Shelley is a playwright, screenwriter and author of several books on film. He lives in Umina Beach, Australia.

“beautiful and talented, actress Frances Farmer is best remembered for the horrific backstory of alcoholism, mental illness, and a lengthy stay in a sanitarium, marked by lurid tales of the filthy conditions and rumors of a lobotomy. The book’s best-executed section considers Farmer’s image in the popular media, notably the 1982 Jessica Lange film, Frances and Farmer’s famous 1958 appearance on the TV show, This Is Your Life”—Library Journal; “the work is even-handed, examining Farmer’s troubled life in a sensitive fashion”—Reference & Research Book News; “Shelley is to be congratulated on his research on Farmer’s career and his determination to finally get the book published. Where this volume is at its most interesting is the biographical section…a volume that the casual and fanatical Frances Farmer fan will want to own”—Scarlet. 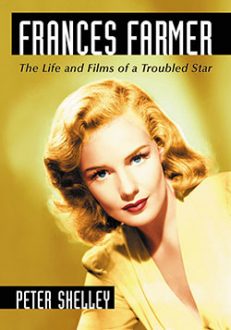