Foundations of Atlantis, Ancient Astronauts and Other Alternative Pasts

148 Documents Cited by Writers of Fringe History, Translated with Annotations

Did aliens visit ancient civilizations? Could Jesus have fathered a dynasty? Did people of the ancient world visit the Americas centuries before Columbus? The public enjoys such questions, which have spawned countless books, movies and television series, but very rarely is any actual evidence produced. According to many eager writers and television hosts, evidence for long-ago astronauts or early transatlantic voyages can be found in ancient texts. But too often sources remain obscure and some writers have altered or fabricated texts to make their case for extraterrestrials and lost civilizations. This book examines more than 130 very old texts used to make the case for Atlantis, aliens, fallen angels, the Great Flood, giants, transatlantic voyagers, ancient high technology and many other mysteries. English translations are presented with explanatory notes showing how these texts have been used and abused to make entertaining claims about prehistory.

Jason Colavito is also a frequent contributor to Skeptic magazine, and has earned praise from Archaeology magazine for his archaeology writing. He lives in Albany, New York and can be found online at www.JasonColavito.com.

Introduction 1
Abbreviations 7
Prologue: The Origins of Fringe History 9
I. The Watchers and the World Before the Flood 13
II. The Pyramids Before the Flood 43
III. The Flood, the Giants and the Ark 56
IV. Flying Chariots and Ancient Astronauts 84
V. Atlantis and Other Lost Civilizations 102
VI. Lost Wisdom of the Ancients 119
VII. High Technology in Ancient Times 137
VIII. Mysteries of the Americas 156
IX. Pre-Columbian ­Trans-Atlantic Contacts 180
X. Holy Blood and Holy Grail 211
XI. Miscellaneous Mysteries 224
XII. Apocryphal Texts 230
Index 255 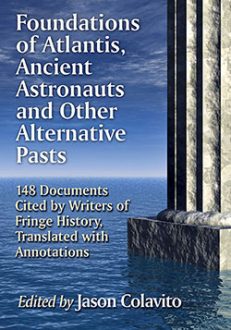 You're viewing: Foundations of Atlantis, Ancient Astronauts and Other Alternative Pasts $29.95
Add to cart