The New York Giants returned to prominence with a Super Bowl victory in 2008, but the franchise has a long and proud history. This book focuses on six different eras of the team, from its 1925 inaugural season, through the “glory years” of the 1950s with stars Frank Gifford and Sam Huff, to its victory over the New England Patriots in Super Bowl XLII, one of the greatest upsets in football history. Players, coaches, general managers, and critical games are highlighted, along with the Mara family, which has guided the franchise since its inception. The growth of the team’s popularity mirrors the rise of the NFL as America’s most popular spectator sport.

Lawrence A. Pervin is professor emeritus of psychology at Rutgers University. Author of nine books on the subject of personality psychology, he’s a clinical psychologist, psychotherapist, and lifetime Giants fan. 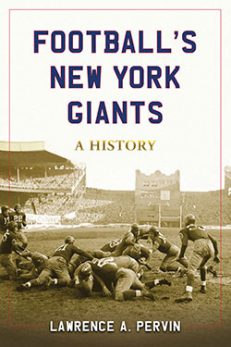