By January 1945, Nazi Germany’s defeat seemed inevitable yet much fighting remained. The shortest way home for American troops was towards Berlin. General George S. Patton’s Third Army would carve its way into the German heartland, the Fourth Armored Division once again serving as his vanguard. This companion volume to the author’s Patton’s Vanguard: The United States Army Fourth Armored Division covers the final months of combat: the drive to Bitburg; the daring exploitation of the bridgeheads on the Moselle, Rhine and Main Rivers; Patton’s ill-fated raid to rescue his son-in-law from a prisoner of war camp deep behind enemy lines; the first liberation of a concentration camp on the Western Front; the drive toward Chemnitz; the controversial push into Czechoslovakia; and the little-known encounter with General Andrey Vlasov’s turncoat Russian Liberation Army.

Don M. Fox serves on the board of directors of the Army Historical Foundation and resides in Jacksonville, Florida.

“brilliant…All skirmishes and battles, whether of short of long duration, are presented and examined, and, for those who have never ridden in a tank during battle, the experience is harrowing, thanks to the narrative skill of fledgling writer, Don M. Fox.”—ARGunners Magazine 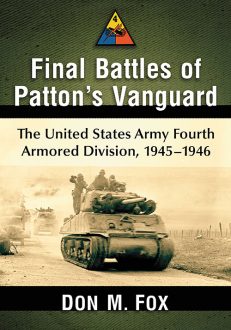 You're viewing: Final Battles of Patton’s Vanguard $45.00
Add to cart