Films You Saw in School

Millions of dollars in public funds were allocated to school districts in the post–Sputnik era for the purchase of educational films, resulting in thousands of 16mm films being made by exciting young filmmakers. This book discusses more than 1,000 such films, including many available to view today on the Internet. People ranging from adult film stars to noted physicists appeared in them, some notable directors made them, people died filming them, religious entities attempted to ban them, and even the companies that made them tried to censor them. Here, this remarkable body of work is classified into seven subject categories, within which some of the most effective and successful films are juxtaposed against those that were didactic and plodding treatments of similar thematic material. This book, which discusses specific academic classroom films and genres, is a companion volume to the author’s Academic Films for the Classroom: A History (McFarland), which discusses the people and companies that made these films.

Geoff Alexander has authored two books on cinema and has written on musical subjects ranging from jazz history to flamenco. He is the founder and director of the Academic Film Archive of North America, in San Jose, California, the first archive solely dedicated to the history, preservation, and scholarship of the classroom educational film. 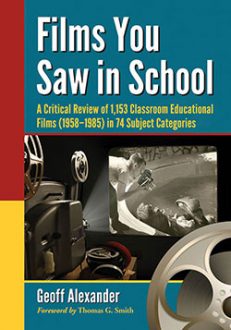