This book demonstrates how horror films of the 1930s and 1940s reflected specific events and personalities of the era, most notably the Great Depression and World War II. Beginning with Dracula and Frankenstein (1931), it relates the many ways that horror films and society intersected: Franklin D. Roosevelt’s skepticism toward conventional wisdom and the public’s distrust of experts was mirrored in Dr. Jekyll and Mr. Hyde and Murders in the Rue Morgue; the freaks in Tod Browning’s 1932 film of the same name revolted against the powerful people of the circus, much like the Bonus Army protested the sufferings of the Depression; King Kong’s rampage on New York personified the anti–New York sentiment in the nation at large; Lon Chaney Jr.’s Wolf Man symbolized the experience of his creator, Curt Siodmak, as a Jewish refugee from Nazi Germany.

3. The Banking Crisis (King Kong) and the Fascist Alternative (The Invisible Man)      75 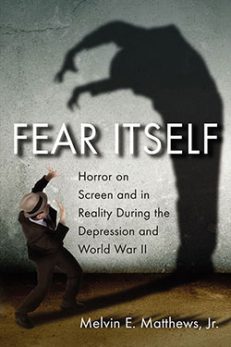