A Baseball Scout Recalls Can’t-Miss Prospects Who Did

﻿ Few would dispute the pitching greatness of Sandy Koufax—but was Paul Pettit better? Jim Baxes was once compared to the great Pie Traynor yet few baseball fans have ever heard of him. John Elway was undeniably one of the greatest quarterbacks in pro football history but could he have been an even better baseball player?
For most fans greatness is measured in trophies and awards and confirmed by consistency over time. During his 70 years in baseball, renowned scout George Genovese witnessed some of the most talented players ever to play the game—some of them unknown to fans. He recalls the careers of unsung greats like Nestor Chavez, Matt Harrington and Derek Tatsuno, who never gained lasting fame despite unrivaled talent.

The late George Genovese was regarded by peers as the greatest baseball scout of all time. His playing career spanned 16 seasons and included a stint in the major leagues. Following 11 seasons as a minor-league manager, Mr. Genovese developed a level of proficiency many believe will never be duplicated. His profession’s highest honor, the lifetime achievement award bestowed by the Professional Baseball Scouts Foundation, bears his name. He lived in North Hollywood, California.
Dan Taylor is a former award-winning television sportscaster. The origins of his announcing work stretch back to summer involvement with minor-league baseball. He lives in Fresno, California.

2. Samson and Delilah with Diamonds 28

4. Lessons from the College of Baseball 73 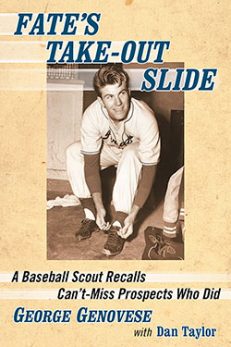