Farewell to the Last Golden Era

The Yankees, the Pirates and the 1960 Baseball Season

In 1960, Major League Baseball reached a crossroads in its history. Facing a challenge from the Continental Baseball League, the owners of the original 16 major league teams elected to admit new clubs. This in-depth look at that pivotal season—the last played with only the original 16 teams—follows the New York Yankees and the Pittsburgh Pirates on their march to the 1960 World Series. The trials and triumphs of these two teams reflect the changes, large and small, that came to define the sport in the following decades—surnames on the backs of the uniforms, exploding scoreboards, the increasing impact of international players, and foremost of all, expansion. Marking the end of the “Golden Age” of baseball and the beginning of the ascendancy of professional football as the national pastime, this historic season witnessed the intersection of the past and future of American professional sports. 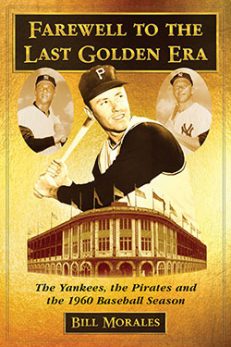 You're viewing: Farewell to the Last Golden Era $25.00
Add to cart