The 1957 Brooklyn Dodgers were past their prime but still boasted a powerful roster with iconic names like Pee Wee Reese, Gil Hodges, Carl Furillo, Duke Snider, Roy Campanella, Don Newcombe, Sandy Koufax and Don Drysdale. They did not achieve greatness—they finished third in the National League—but did achieve legendary status as the last of the Brooklyn Dodgers, and marked the end of a fantastic era of baseball, when the New York Yankees, the New York Giants, and the Dodgers were the epicenter of the game’s Golden Age. Baseball would never be quite the same.
Documenting the fabled team’s final season in New York, this book focuses on the games, the player’s stories and the down-to-the-wire struggle by Brooklynites and politicians to keep the club from relocating to Los Angeles in 1958. Detailed biographies of each player and coach, and manager Walter Alston are included. 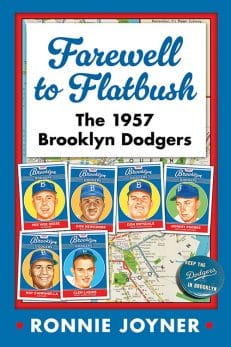 You're viewing: Farewell to Flatbush $35.00
Add to cart