Eyewitnesses to the Great War

Beginning with the novelist Edith Wharton, who toured the front in her Mercedes in 1915, this book describes the wartime experiences of American idealists (and a few rogues) on the Western Front and concludes with the doughboys’ experiences under General Pershing. Americans were “over there” from the war’s beginning in August 1914, and because America was neutral until April 1917, they saw the war from both the French and German lines. Since most of the Americans who served, regardless of which side they were on, were in Champagne and Lorraine, this sector is the focus. Excerpts from memoirs are supplemented by descriptions of personalities, places, battles and even equipment and weapons, thus placing these generally forgotten American adventurers into the context of their times. A special set of maps based upon German Army battle maps was drawn and rare photographs supplement the text.

For years, Ed and Libby Klekowski have spent lengthy periods in a farmhouse in Lorraine, exploring the nearby villages and forests for the artifacts of war. Their discoveries were the basis of two hour-long documentaries on World War I on American Public Television. They live in Leverett, Massachusetts.

“This well-crafted history is truly a kaleidoscope of the sounds, textures, and smells of the Western Front World War I”—The Journal of the World War One Historical Association “provides a readable narrative journey through the day to day history of the war”—Reference & Research Book News. 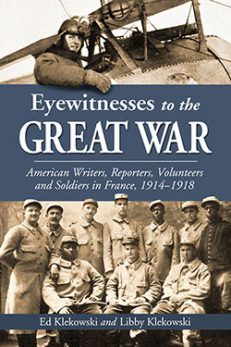 You're viewing: Eyewitnesses to the Great War $29.95
Add to cart