Memoir of an American Spy Betrayed by the CIA

An Iowa boy away at college, Verne Lyon was recruited by the CIA to spy on college professors and fellow students as part of Operation CHAOS, a massive domestic surveillance program carried out at the height of the Vietnam War. Framed by his handlers for an airport bombing, he was later dispatched to Cuba to subvert the Castro regime.
Balking at his increasingly nefarious missions, he tried to quit—and, twice kidnapped by the CIA, he landed in Leavenworth Penitentiary. Today a free man, his memoir details his journey through the secret workings of the U.S. government.

Verne Lyon is an Aerospace engineer, a private pilot with numerous achievement certificates from the FAA, a certified open water SCUBA diver, and former operative of the Central Intelligence Agency. He helped found and direct the Association of Responsible Dissent and the Association of National Security Alumni, both entities made up of former national security agents and officers. He lives in the Midwest.
Philip Zwerling is the director of the creative writing program at the University of Texas Rio Grande Valley. He is the author of three books and numerous journal, magazine and newspaper articles. 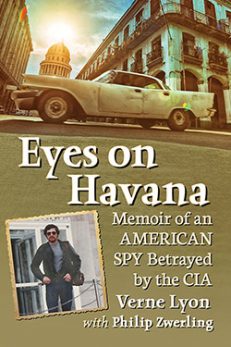