Essays on the Films and Franchise

With his signature bullwhip and fedora, the rousing sounds of his orchestral anthem, and his eventful explorations into the arcana of world religions, Indiana Jones—archeologist, adventurer, and ophidiophobe—has become one of the most recognizable heroes of the big screen. Since his debut in the 1981 film Raiders of the Lost Ark, Indiana Jones has gone on to anchor several sequels, and a fifth film is currently in development. At the same time, the character has spilled out into multiple multimedia manifestations and has become a familiar icon within the collective cultural imagination.

Despite the longevity and popularity of the Indiana Jones franchise, however, it has rarely been the focus of sustained criticism. In Excavating Indiana Jones, a collection of international scholars analyzes Indiana Jones tales from a variety of perspectives, examining the films’ representation of history, cultural politics, and identity, and also tracing the adaptation of the franchise into comic books, video games, and theme park attractions.

Randy Laist is a professor of English at Goodwin College in East Hartford, Connecticut. He is the author of three books, as well as numerous articles on literature, popular culture, and pedagogy.

• “As befits a franchise whose protagonist is a scholar, Excavating Indiana Jones: Essays on the Film and Franchise pays close attention to the sources, craft, and afterlives of this famous archaeologist. While the essays come from a place of general appreciation, they are admirably critical in their engagement with many crucial aspects of the films, comics, video games, and theme park rides focused on Jones. In particular, this collection builds on extant critiques of the franchise’s colonialism, muddled sense of history, and Spielbergian hang-up on father figures while delving into new explorations of things like the transmedia legacies of the brand and its indebtedness to real-life adventurers and filmmakers, such as John Ford. The book does not belong in a museum so much as it belongs in a library!”—Kevin M. Flanagan, George Mason University

• “Travel back to the days of adventure, excitement, edge of your seat suspense, where the line between good and evil was clearly defined and strong central characters carried films.”—Boyce McClain’s Collector’s Corner 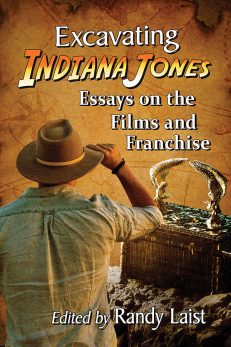