Everything Happens in Chillicothe

A Summer in the Frontier League with Max McLeary, the One-Eyed Umpire

“One thing about Max was that he was about as well-adjusted to his disability, if you want to call it that, as anyone could be… He even used his eye once to shut up an obnoxious high school coach. After he’d heard all the complaining he wanted to hear, Max took his eye out of the socket and handed it to the stunned coach, saying, ‘You want to umpire this game? Here, be my guest.’”Everything Happens in Chillicothe is an authentic, behind-the-scenes look at the lowest rung of professional baseball, and a biography of Max McLeary, the one-eyed umpire and a most intriguing individual. Author Mike Shannon spent the 2000 Frontier League season attending games with McLeary and gives his account of the season here. The book speaks volumes about umpiring as a profession, relationships (particularly between Max and his estranged son, a minor league player; between Max and his long-suffering wife Patty; and between Max and his umpiring partner Jim Schaly), life in small-town America, and the various people connected with the Chillicothe Paints and other teams in the Frontier League. Many humorous and poignant stories, are told here for the first time, by McLeary, Schaly, and others.

Mike Shannon is the co-founder and current editor-in-chief of Spitball magazine. The author of more than a dozen baseball books, he lives in Cincinnati. 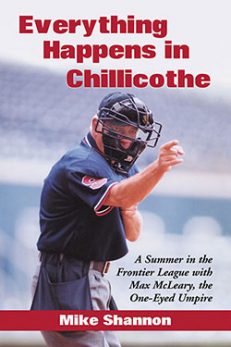 You're viewing: Everything Happens in Chillicothe $29.95
Add to cart