While great strides have been made since the Founding years, the United States continues to suffer from a high degree of political inequality. Some citizens have a louder voice in their democracy than others. Both the malapportioned Senate and Electoral College overrepresent Americans in small states, while gerrymandered districts poorly convert votes into power in the House of Representatives. More than four million Americans living in Washington, D.C., and the territories lack representation in Congress, while citizens everywhere face unnecessary burdens to cast ballots. Biased media and questionable political funding render it difficult to hold elected officials accountable.

This book explores these formidable problems and identifies the path to securing a fairer, more representative political system. Sourcing solutions directly from the Constitution, chapters outline the tools that could limit malapportionment, expand voting rights, control the influence of big donors and more. Achieving these reforms, however, requires an engaged citizenry that demands change from those in power.

Elliott Fullmer is an associate professor of political science at Randolph-Macon College in Ashland, Virginia. His research on voting behavior has been published in such scholarly journals as American Politics Research, Election Law Journal, Presidential Studies Quarterly and others. He has authored opinion pieces on democracy reform for USA Today, Richmond Times-Dispatch, and Virginia Capitol Connections. He lives in Richmond, Virginia. 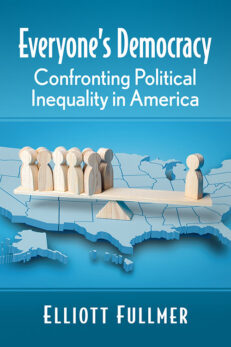