On May 10, 1945, Lieutenant James D. McBrayer and three other U.S. Marine officers were crowded onto a Japanese train in China, leaving the POW camp at Kiangwan and headed for a ship that would transport them to Japan. Since their imprisonment in December 1941, the four men had continuously plotted their escape, waiting for the opportune moment to put their plan into action.
The crowded boxcar provided them with such an opportunity. As darkness descended the four Marines put their plan into action, removing the two rusty bars and strands of barbed wire covering the boxcar’s window and jumping out into the Chinese countryside. This is the gripping story of the author’s imprisonment in China, his daring escape from the POW train, the dangerous passage through the country with the help of Chinese Communist guerillas, and his return to the United States 61 days after his escape.

“an entertaining tale of eluding the Japanese…virtually grist for the movies”—Booklist; “a good book”—American Libraries. 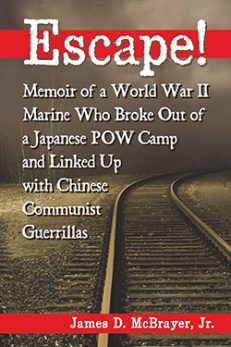