U.S. Navy Supply Corps Ensign Ross Hofmann had no idea what was in store for him when he arrived at Cavite Naval Base in October 1941. Two months later, Japanese forces struck the Philippines, destroying the base and forcing U.S. personnel to retreat to Bataan. There, Hofmann joined a makeshift unit of Army Aircorps ground personnel, U.S. Marines, U.S. sailors, U.S. Naval ground battalions and Filipinos to fight a Japanese force that landed nearby.
In March 1942, with the fall of Bataan imminent, he traveled to Cebu to run supplies through the blockade of Bataan and Corregidor. Soon after his arrival, the Japanese landed on Cebu, forcing the Americans to retreat again. Hiking through jungles and crossing dangerous waters in barely seaworthy vessels, Hofmann avoided capture and reached an American base in Mindanao.
He received orders to establish a seaplane base on Lake Lanao. As Japanese troops landed nearby, two seaplanes returning from Corregidor stopped to refuel, one of them hitting a submerged rock on take-off. In a harrowing race against the enemy advance, Hofmann and others worked feverishly to fix the plane and escape before the Japanese converged on Lake Lanao. This memoir recounts Hofmann’s experiences in vivid detail.
Instructors considering this book for use in a course may request an examination copy here.

David L. Snead is a history professor at Liberty University in Lynchburg, Virginia.
Anne B. Craddock is a professional artist and International Montessori teacher. Her father is the author of this memoir.

“recounts Hofmann’s experiences in vivid detail…an inherently fascinating and consistently compelling read from beginning to end. An invaluable and appreciated contribution to the growing library of World War II literature…recommended”—Midwest Book Review; “compelling account…more than a memoir. The book serves as a reminder of the consequences of leadership failure…highly recommended”—Army University Press. 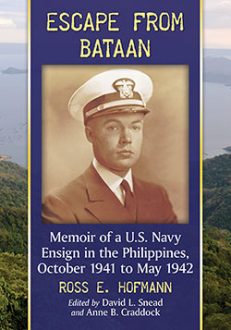