“I’m just an ordinary writer,” Erskine Caldwell once wrote. “I’m not trying to sell anything; I’m not trying to buy anything. I’m just trying to present my vision of life.” Yet his vision of Southern grotesques, of slack-jawed, pellagra-ridden sharecroppers, repressed farmwives, and oversexed nymphets, elicited anything but an “ordinary” response. Hailed by the likes of F. Scott Fitzgerald and Maxwell Perkins, reviled by others as a pornographer or sensationalist, Caldwell was once called “America’s most popular author.” Once the furor flagged, Caldwell was relegated to the “mansions of subliterature,” where his reputation resides today.
This book contains more than 150 previously unpublished letters, notes, telegrams, and postcards written between 1929 and 1955, at the peak of Caldwell’s popularity and influence, all extensively annotated. The introduction assays Caldwell’s significance in American popular culture and literary studies and establishes the importance of Caldwell’s correspondence as a means of understanding the intentions of a man who was otherwise terse and unforthcoming about his work.

Robert L. McDonald is associate dean for academic affairs and professor of English at Virginia Military Institute. He has written numerous essays on Southern literature and art and edited two other books on Caldwell. A past president of the Popular/American Culture Association in the South, he lives in Lexington, Virginia.

“provides an extensive annotation to the over 150 letters, notes, telegrams, and postcards written between 1929 and 1955…. These annotations are one of the best features of the collection in that they give a depth of understanding…edited with both professional concern and honest admiration for Caldwell and his work. It is certainly a collection that ought to be in every college and university library”—Popular Culture Association; “the letters…shed light on a creative writer operating in the southern USA during the years 1929–1955”—Reference Reviews; “a valuable scholarly book…an engagingly good read…a coherent and absorbing narrative”—Mississippi Review; “includes more than one hundred and fifty previously unpublished letters, notes and postcards written between 1929 and 1955”—American Literature. 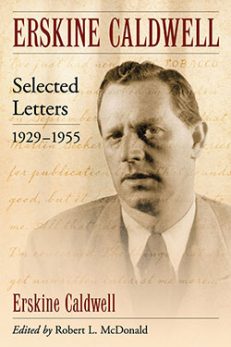