This book takes an ecrocritical approach to analytical readings of animated feature films, short subjects and television shows. Beginning with the “simply subversive” environmental messages in the Felix the Cat cartoons of the 1920s, the author examines “green” themes in such popular animated film efforts as Bambi (1942), The Simpsons Movie (2007), Wall-E (2008) and Happy Feet (2008), as well as James Cameron’s live action/animation blockbuster Avatar (2009). The discussion extends beyond American films to include the works of Japanese animator Hayao Miyazaki, including the Oscar-winning Spirited Away (2002). Also evaluated for their pro-ecological content are the television cartoon series South Park and Futurama. The appendix provides a list of film and television titles honored with the Environmental Media Award for Animation.

Deidre M. Pike is an assistant professor of convergent journalism in the School of Communications at the University of Hawai’i at Manoa. As a writer and editor for the Reno News & Review and other publications, she has won several Nevada Press Association awards for news, business and entertainment reporting. 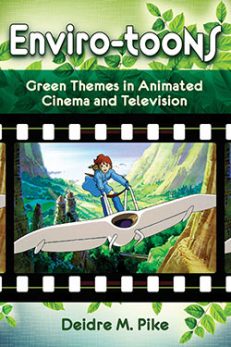