Enduring What Cannot Be Endured

Dorothy Dore was born in the Philippines to a British father who served there in the Spanish American War, and to a Filipina mestiza mother. This young woman was attending an exclusive private school when Pearl Harbor was bombed on December 7, 1941. The Japanese Imperial Army made a swift invasion of the Philippines, and Dorothy’s life became a nightmare.
As recounted in this moving memoir, Dorothy studied nursing so that she could support the United States Armed Forces Far East (USAFFE). She spent the war years on the run, working for the USAFFE when she could, but abandoning those duties when her family was in need. Dorothy recalls the sacrifices of her family, the brutal treatment of civilians by the Japanese, and the vainglorious actions of some of the USAFFE guerrilla leaders. It is a compelling story of love, loss, family, courage, and survival during an especially horrifying time.

Dorothy Dore Dowlen immigrated to the United States in 1951. She now lives in San Jose, California.
Theresa Kaminski, associate professor of history at the University of Wisconsin–Stevens Point, teaches a variety of courses on American women’s history and specializes in gender and war. 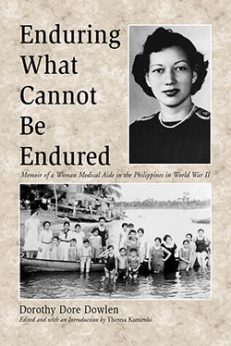 You're viewing: Enduring What Cannot Be Endured $29.95
Add to cart