The Search for Peace During World War I

Most histories of World War I revolve around gruesome battles, ribboned generals and feats of military heroism. All too often the acts of those who tried to stop the fighting by word or deed have been drowned out by the roar of cannons. Yet even in the heat of battle individuals of courage stepped forward and attempted to bring the better part of humanity out of darkness and to revive the phoenix of peace.
This book tells in detail the stories of these people and their organizations, in Asia, North and South America and Europe. Henry Ford’s “peace ship” of December 1915, the famous Christmas truce of 1914, secret diplomatic missions by Austro-Hungarian Prince Sixtus, and myriad other efforts are described, showing that the desire for peace was widespread and fervent.

Neil Hollander has been a university professor, sailor, journalist and film producer/director. He lives in Paris, France.

One • A Prelude for Peace 3 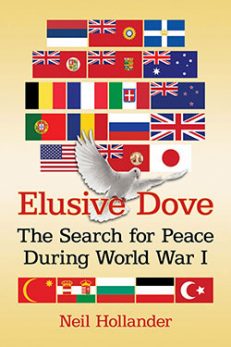