Eliseo Subiela in Life and Cinema

The Persistence of Vision

Audiences never have a lukewarm opinion of a Subiela film. They either love it passionately or hate it profoundly. The fact that Eliseo Subiela (Buenos Aires, 1944–2016), an original and sensitive thinker, survived, and indeed thrived in economically challenged Argentina while garnering more accolades abroad than in his own country, is a tribute to his grit, intelligence, imagination and persistence of vision. With an astounding list of prizes and honors, he was a world-class auteur. Even when he was making a TV commercial, his surreal style and sensibility were unmistakable.
This book represents the culmination of 20 years of research and personal correspondence with Eliseo Subiela. Through ten scholarly studies and five interviews, it sheds light on his life, aestheticism, obsessions, struggles with madness, and, of course, his films. It addresses his earlier career in advertising, lifelong artistic influences, screenwriting techniques, critical reactions to his films, and what Subiela’s example has to offer aspiring filmmakers, especially those in Latin America.

Nancy J. Membrez is a professor of Spanish literature, culture and the Latin American film, as well as film production, at the University of Texas at San Antonio. She wrote the English subtitles for four Subiela films and produced three featurettes for the Kino Lorber DVD/Blu-ray of Man Facing Southeast. Her Portrait in Sepia Tone won Best Picture and Best Sound Track at the International Filmmakers’ Film Festival in Kent, England, in 2008. 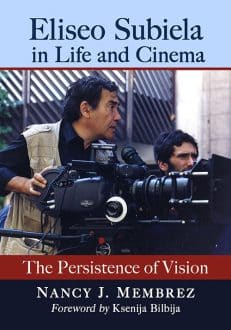 You're viewing: Eliseo Subiela in Life and Cinema $55.00
Add to cart