The Political and Religious Landscape of Copts and Muslims

Egypt’s lack of a common national identity is the basis for much of its internal conflict—Coptic Christians have been particularly affected. Once major contributors to Christian civilization, their influence ended with the 5th century Council of Chalcedon and they endured persecution. With the 7th century Arabization of Egypt, Copts were given dhimma or “protected persons” status.
The 1919 revolution granted them greater political participation but the 1952 revolution ended liberal democracy and established a military regime that championed Arab identity.
Secular Egyptians rebelled against the Mubarak regime in 2011, yet his successor was the Muslim Brotherhood’s Mohamed Morsi, Egypt’s first Islamist president. In yet another fight over national identity, secular factions removed Morsi in 2013—the Copts suffered the brunt of violence.

Girgis Naiem is keenly interested in the Middle East and the evolving political situation in Egypt. 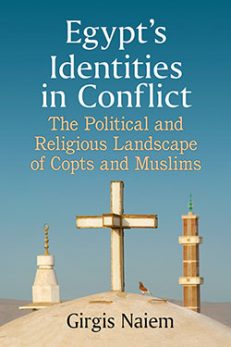 You're viewing: Egypt’s Identities in Conflict $39.95
Add to cart