The Life and Times of Hughie Jennings, Baseball Hall of Famer

Baseball player and manager Hugh Ambrose Jennings was the kind of colorful personality who inspired nicknames. Sportswriters called him “Ee-yah” for his famous coaching box cry and “Hustling Hughey” for his style of play. But to the nearly 100 other men from northeast Pennsylvania who followed Jennings from the coal mines to the major leagues, he was known as “Big Daddy,” not for his physical stature but for his iconic status to men desperate to escape the mines.
The son of an immigrant coal miner from Pittston, Pennsylvania, Jennings himself became a miner at the ripe old age of 11 or 12. He eventually became a mule driver, earning $1.10 per day and dreaming of getting $5 per day for playing baseball on Saturday afternoons. From the rough-and-tumble world of semi-pro baseball to the major leagues, Jennings was driven to succeed and fearless in his pursuit of his dream. He joined the Baltimore Orioles in 1894 and went on to become manager of the Detroit Tigers during Ty Cobb’s heyday. Jennings’ story is emblematic of how the national pastime and the American dream came together for a generation of ballplayers in the early 20th century. 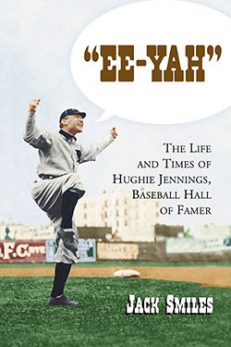