A Biography and Performance History

The great nineteenth-century stage actor Edwin Booth began his long career in 1849 as a young teenager, following in his father’s footsteps. This biography traces his life and career as a tragic actor, including his childhood; his early acting tours of California, Australia and Hawaii; his rise to fame as a touring star; his two marriages; his relationship with his brother John Wilkes Booth; his disastrous management of Booth’s Theatre in New York City; and his death in 1891. The book includes an extensive performance history detailing every known Edwin Booth performance during his more than 30 years on the stage, with reviews and other supplementary materials.

A graduate of Dartmouth College and Yale University, Arthur W. Bloom has served as a professor and academic administrator at Loyola University Chicago, Loyola Marymount University, Los Angeles; and Kutztown University in Pennsylvania. He lives in Chalfont, Pennsylvania. 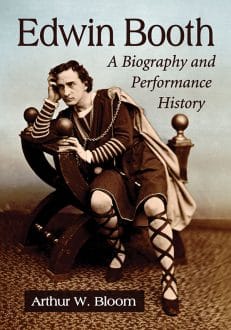