Essays on the King of the B’s

This collection of 20 essays pays homage to a filmmaker who had a reputation for delivering the most movie for the least money. Edgar G. Ulmer, nicknamed “The King of the Bs” and “The King of Poverty Row,” gave us classics like The Black Cat, starring Bela Lugosi. His stealing away the wife of a producer led to exile from Hollywood and, working outside the studio system and with low budgets, he turned out film noir, science fiction, and ethnic films that achieved cult status and critical acceptance.

Bernd Herzogenrath teaches American literature and culture at the University of Frankfurt and the University of Cologne in Germany. He is also the editor of The Films of Tod Browning: Essays on the Macabre and Grotesque (McFarland 2008).

Ulmer and Cult/ure
BERND HERZOGENRATH      23
Camera Obscura, or Moments of Broken Economy in Edgar G. Ulmer’s Films
STEFAN GRISSEMANN      39
The Ordinary Life of Ordinary People: Menschen am Sonntag
PETRA LÖFFLER      49
Ulmer’s Anti-Syphilis Film: Damaged Lives and Its Novelization
MARCEL ARBEIT      63
The Black Cat
GREGORY WILLIAM MANK      89
In Search of Jewish Identity
SHARON PUCKER RIVO      105
Moon of Alabama / Moon Over Harlem: African American Culture and German Imaginations from Brecht to Ulmer
FRANK MEHRING      119
Detour’s History/History’s Detour
DANA POLAN      137
The Strange Woman: An Analysis with Gilles Deleuze’s Notion of the Impulse-Image
JULIA MEIER      150
The Logic of Contradiction and the Politics of Desire in Ruthless
REYNOLD HUMPHRIES      159
The Man from Planet X
MATTHEW SWENEY      171
Camp, Art Film, Classical Hollywood Cinema and Babes in Bagdad
HERBERT SCHWAAB      183
The Pleasures of the “Not-Quite Movie”: Murder Is My Beat and Daughter of Dr. Jekyll
EKKEHARD KNÖRER      196
Products of Circumstances
STEFANIE DIEKMANN      206
The Naked Dawn: Production, Sources, and Mise-en-Scène
BILL KROHN      215
The Effects of the Displacement of Home in Daughter of Dr. Jekyll
MICHAL PEPRNÍK      225
What You See Is What You Get: Ulmer and the Nudist Picture
PETRA HANÁKOVÁ      236
Geocinema and Geophilosophy: The Cavern
PHILIPP HOFMANN      248
Ulmer in the Aquarium
ADRIAN MARTIN      262

“Herzogenrath…has a real affection for his subject”—Little Shoppe of Horrors; “A terrific director who honed his chops on German Expressionism and economic necessity, the legendary Edgar G. Ulmer set up aesthetic shop making six-day wonders in the cinema’s lower depths. Ulmerian mise-en-scène is synonymous with problem solving—and vice versa. No filmmaker ever demonstrated a more formidable capacity for making something from nothing and Bernd Herzogenrath’s anthology pays belated, serious tribute to his genius.”—J. Hoberman, film critic and author of Bridge of Light: Yiddish Film between Two Worlds, and co-author of Midnight Movies; “At last, here is a scholarly book in English about one of the key figures of low-budget and marginal cinema who has most eluded scholarship. Bernd Herzogenrath’s fascinating collection not only clarifies many particulars about the life, career, and art of Ulmer (including his birthplace); it also proposes some new and more fruitful routes we might take in understanding them.”—Jonathan Rosenbaum, author of Discovering Orson Welles, and co-author of Midnight Movies. 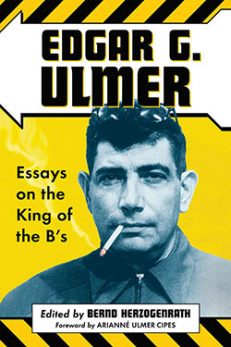