A Military and Social History to the Mid–19th Century

As the Dark Ages enveloped Europe, a civilization was born on the banks of the Dnieper River. Rus—whose capital at Kiev surpassed in grandeur most cities of Europe—was home to the Ukrainian people, whose princes made war on Constantinople and established the city states of what would become Russia. The cities of Rus were destroyed by the Mongols, their remains falling to the Polish-Lithuanian kingdom. With the steppe restored to wilderness, the “kraina” borderlands of the hardy frontiersmen known as Cossacks—who in the 17th century destroyed powerful Polish, Lithuanian and Muscovite armies—gained Ukrainian independence and established a unique social order.
Drawing on English, Ukrainian and French sources, this book chronicles the military and social origins of Ukraine and describes the differences between Ukraine and its neighbors. The author refutes the claim that Ukraine and Russia were once united in a common political system.

Alexander Basilevsky is professor emeritus of mathematics and statistics at the University of Winnipeg. He has a long record of applying statistical methods to the social sciences and is author of several dozen scientific papers, books and government reports. He lives in Winnipeg, Manitoba.

Acknowledgments vi
Preface 1
Introduction: History and Politics 5
One. The Early History 13
Two. The Roman Empire 35
Three. The Slavs and the Roman Empire 56
Four. Rus: The Early Beginnings 79
Five. The Rise of the Kyiv State 92
Six. Civilization Comes to Rus 109
Seven. The Papal Crusades 128
Eight. Internal Conflict and Foreign Invasion 150
Nine. The Coming of the Mongols 166
Ten. The Rise of the Cossacks 183
Eleven. The Zaporozhian Brotherhood and the First Cossack Wars 199
Twelve. Rising Up Against Oppression 227
Thirteen. The Ukrainian Revolution 257
Fourteen. The Revolution Continues 277
Fifteen. Alliance with the Tsar and the Death of Khmelnitsky 293
Sixteen. The Cossacks Defeated 313
Seventeen. The End of Cossack Freedom 340
Epilogue: The Birth of the Ukrainian State 367
Chapter Notes 373
Bibliography 387
Index 395 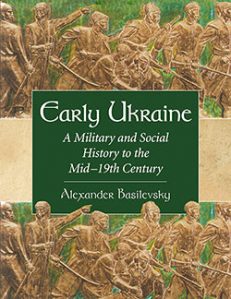