A Galaxy of B-Movie Starlets of the Sixties

During the 1960s, a bushel of B–movies were produced and aimed at the predominantly teenage drive-in movie audience. At first teens couldn’t get enough of the bikini-clad beauties dancing on the beach or being wooed by Elvis Presley, but by 1966 young audiences became more interested in the mini-skirted, go-go boot wearing, independent-minded gals of spy spoofs, hot rod movies and biker flicks.
Profiled herein are fifty sexy, young actresses that teenage girls envied and teenage boys desired including Quinn O’Hara, Melody Patterson, Hilarie Thompson, Donna Loren, Pat Priest, Meredith MacRae, Arlene Martel, Cynthia Pepper, and Beverly Washburn. Some like Sue Ane Langdon, Juliet Prowse, Marlyn Mason, and Carole Wells, appeared in major studio productions while others, such as Regina Carrol, Susan Hart, Angelique Pettyjohn and Suzie Kaye were relegated to drive-in movies only.
Each biography contains a complete filmography. Some also include the actresses’ candid comments and anecdotes about their films, the people they worked with, and their feelings about acting. A list of web sites that provide further information is also included.

Tom Lisanti is the award-winning author of multiple books about film history, and he blogs at www.sixtiescinema.com. He lives in New York.

“Lisanti gives 1960s glamour girls something they never had before in film circles: respect. His approach is a mixture of fun with the seriousness of a film historian. The concoction is irresistible, and it’s fantastic that these gals get their turn to tell their stories and share their good and bad times in the movie world…valuable…highly recommended. Lisanti is the supreme chronicler of the ’60s era…simply amazing…excellent writer”—Classic Images; “wildly entertaining…well-researched and informative”—Paper; “Lisanti does a great service to fans of these movies, actresses, and the times”—Cult Movies; “interesting”—Femme Fatales; “well researched and loaded with pictures…fine tribute”—Shock Cinema; “there are many things I love about Tom Lisanti’s Drive-in Dream Girls, a babe-by-babe survey of some of 1960s cinema’s sexiest screen starlets, but one that makes it the wheat among similar chaff is how candid its subjects are”—Bookgasm; “read this book”—Sex-Kitten.Net. 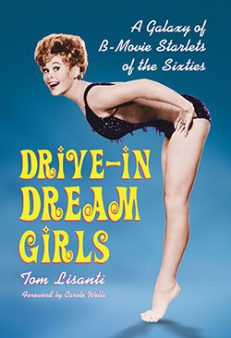