The golden age of animation stretched from the early 1930s to the mid–1950s, with movie cartoons reaching an extraordinarily high level of artistry and technique—far higher than today’s TV cartoons, for instance.
Nearly 1000 cartoons were produced by the seven major animation studios in the U.S. between January 1, 1939, and September 30, 1945—the immediate pre–World War II period up to the cessation of hostilities. More than a quarter of the cartoons substantially refer to the war, and thereby are invaluable in helping to understand American attitudes and Hollywood’s reflection of them.
The meat of Doing Their Bit is a filmography with extremely detailed summaries of the 260 or so commercially produced, animated, war-related shorts, 1939–1945. There is also a good bit of overall commentary on these films as a group. Two chapters wrap up animated cartoons of World War I and the general political tenor of animated talkies of the 1930s. This edition also includes a new chapter on the outrageous government-sponsored Pvt Snafus.

Film historian and media propaganda specialist Michael S. Shull currently teaches film history at George Washington University and teaches mass communications at Montgomery College (both in the Washington, D.C., area). He lives in Germantown, Maryland.
David E. Wilt is a librarian at the University of Maryland in College Park. Together they authored Hollywood War Films, 1937–1945 (1996). Wilt is also the author of The Mexican Filmography (2003).

“invaluable”—Classic Images; “entertaining…a welcome addition”—ARBA; “provides a content analysis of wartime cartoons…reflecting the way in which war themes were handled”—Animation Journal; “this volume demonstrates the value of the [animation] art form to the study of 20th century American history”—Choice; “a serious study”—Communication Booknotes Quarterly; “carefully researched…useful facts…informative…the authors make the films come alive. They make reading about these historic works exciting”—ASIFA; “a fine tribute to the animated film and its unique contribution”—Movie Collector’s World; “useful…notable”—ANQ; “extremely detailed”—Reference and Research Book News; “Important addition to the field of animation scholarship.”—Richard Shale, author of Donald Duck Joins Up. 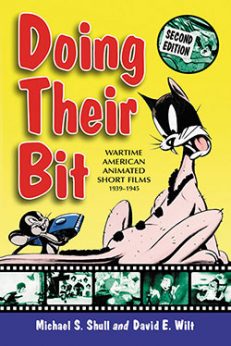