Essays on the Intersection of Documentary and Fictional Filmmaking

Through most of the 20th century, the distinction between the fictional narrative film and the documentary was vigorously maintained. The documentary tradition developed side by side with, but in the shadow of, the more commercially successful feature film. In the latter part of the century, however, the two forms merged on occasion, and mockumentaries (fictional works in a documentary format) and docudramas (reality-based works in a fictional format) became part of the film and television landscape.
The 18 essays here examine the relationships between narrative fiction films and documentary filmmaking, focusing on how each influenced the other and how the two were merged in such diverse films and shows as Citizen Kane, M*A*S*H, This Is Spinal Tap, and Destination Moon. Topics include the docudrama in early cinema, the industrial film as faux documentary, the fear evoked in 1950s science fiction films, the selling of “reality” in mockumentaries, and reality television and documentary forms. The essays provide a foundation for significant rethinking of film history and criticism, offering the first significant discussion of two emerging and increasingly important genres.
Instructors considering this book for use in a course may request an examination copy here.

Gary D. Rhodes, a documentary filmmaker, is a professor at the Queen’s University, Belfast.
John Parris Springer is a professor of English and film studies at the University of Central Oklahoma. He lives in Norman, Oklahoma.

2. The Newspaper Meets the Dime Novel: Docudrama in Early Cinema

3. On the Edges of Fiction: Silent Actualités, City Symphonies and Early SF Movies

4. This Reality Which Is Not One: Flaherty, Buñuel and the Irrealism of Documentary Cinema

9. In Search of Questions, or, A New Age Film Odyssey

10. Artifice and Artificiality in Mockumentaries

12. “That’s Really the Title?” Deconstructing Deconstruction in The Positively True Adventures of the Alleged Texas Cheerleader-Murdering Mom (1993) and Real Life (1978)

14. Stanley Kwan’s Centre Stage (1992): Postmodern Reflections of the Mirror Within the Mirror

16. Before Big Brother, There Was Blair Witch: The Selling of “Reality”

18. The Future of Documentary? “Conditional Tense” Documentary and the Historical Record 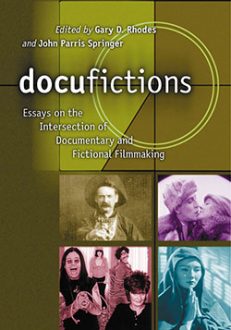 You're viewing: Docufictions $29.95
Add to cart