Doctor Who and Science

Essays on Ideas, Identities and Ideologies in the Series

Science has always been part of Doctor Who. The first episode featured scenes in a science laboratory and a science teacher, and the 2020 season’s finale highlighted a scientist’s key role in Time Lord history. Hundreds of scientific characters, settings, inventions, and ethical dilemmas populated the years in between. Behind the scenes, Doctor Who‘s original remit was to teach children about science, and in the 1960s it even had a scientific advisor.

This is the first book to explore this scientific landscape from a broad spectrum of research fields: from astronomy, genetics, linguistics, computing, history, sociology and science communication through gender, media and literature studies. Contributors ask: What sort of scientist is the Doctor? How might the TARDIS translation circuit and regeneration work? Did the Doctor change sex or gender when regenerating into Jodie Whittaker? How do Doctor Who‘s depictions of the Moon and other planets compare to the real universe? Why was the program obsessed with energy in the 1960s and 1970s, Victorian scientists and sciences then and now, or with dinosaurs at any time? Do characters like Missy and the Rani make good scientist role models? How do Doctor Who technical manuals and public lectures shape public ideas about science?

Marcus K. Harmes is a professor at the University of Southern Queensland, Toowoomba, Australia. He researches on British popular culture especially science fiction and horror.

Lindy A. Orthia is a senior lecturer in science communication at the Australian National University in Canberra. She has written extensively on Doctor Who and science.

Acknowledgments v
Timeline and Terminology for Doctor Who’s Doctors and Eras 1
Introduction to Doctor Who and Science
Lindy A. Orthia and Marcus K. Harmes 3
Who’s Planet Looks Like Home?
J.J. Eldridge 18
Who’s Moon
Elizabeth R. Stanway 33
E=mc3: Doctor Who and Energy
Marcus K. Harmes 48
Translation by TARDIS: Exploring the Science Behind Multilingual Communication in Doctor Who
Mark Halley and Lynne Bowker 62
“I don’t want to go”: How Does Regeneration Work in Doctor Who?
Natalie Ring 78
Did the Doctor Change Sex or Change Gender? Navigating the Sex and Gender Divide in Doctor Who
Mike Stack 94
Candyfloss, Lego and Hope: What Sort of Scientist Is Jodie Whittaker’s Doctor?
Lindy A. Orthia and Vanessa de Kauwe 110
The Mad Scientist Wore Prada: Female Frankensteins in the Universe of Doctor Who
Kristine Larsen 127
Maxtible’s Mirrors: Victorian Science in ­Classic-Era Doctor Who
Marcus K. Harmes and Richard Scully 142
The Victorians Sleeping in Our Minds: Victorian Scientific Enquiry in Old and New Series Doctor Who
Catriona Mills 157
Doctor Who and the Dinosaurs: Spectacle, Monstrosity, Melodrama and Ideology in Dinosaur Mediations
Ross Garner 173
The Use and Abuse of Scientific Writing in Doctor Who’s Epistolary Paratexts
Tonguç İbrahim Sezen 190
The Science of Doctor Who
Mark Erickson 205
Concluding Remarks: Science in Twenties Doctor Who
Lindy A. Orthia and Marcus K. Harmes 221
About the Contributors 227
Index 231 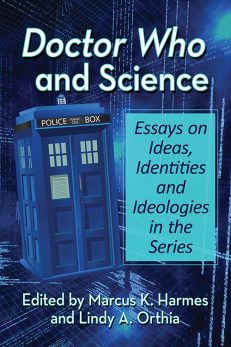 You're viewing: Doctor Who and Science $39.95
Add to cart