As a combat medical aidman of Company B, 1st Medical Battalion, First Infantry Division, Allen N. Towne experienced some of the pivotal events of World War II. “Doctor B,” as his unit was known, was attached to the 18th Regimental Combat Team and moved with them, providing continuous close medical support. Covering both little-known engagements, and such historic moments as the campaign in Sicily and the D Day landings at Omaha Beach, this book is both a memoir and a history of one of the war’s most impressive units. The text is based on both official “morning reports” and the author’s personal notes, providing accuracy as well as human insight. In Doctor Danger Forward (“danger forward” was the code name of the First Division headquarters), Towne, who received the Bronze Star and Oak Leaf Cluster for his heroism at Omaha Beach and Normandy, chronicles events both epic and intimate, profoundly serious as well as humorous. There are numerous maps and photographs, including many taken by the author.

The late Allen N. Towne was a retired engineer and businessman who received three U.S. patents, authored many technical papers, and taught at the University of New Hampshire and Northeastern University. He lived in Richmond, Virginia.

“a memoir of his service as a combat medic with the Big Red One in WWII. This excellent memoir provides much detail about World War II from a perspective not usually found in combat accounts. Thanks to…Allen Towne for [his] contribution to the great story of the Big Red One”—Bridgehead Sentinel; “Very revealing…a treasure.”—Walter D. Ehlers, Medal of Honor Recipient, First Infantry Division. 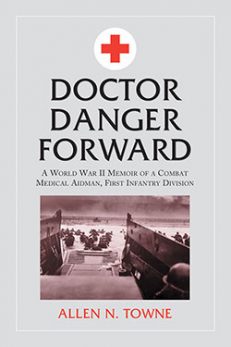