Only 3 left in stock

More than 40 million Americans have served in the U.S. military during wartime. Only 3500 have been awarded the Medal of Honor. Of these, three have received the medal twice. One was recommended for it a third time. Marine Corps Sergeant Major Daniel J. Daly was an unlikely hero at five feet, six inches tall and 132 pounds. What he lacked in size he made up for in grit. He received his first Medal of Honor for single-handedly holding off enemy attacks during China’s Boxer Rebellion of 1900, the second for his daring, one-man action during an ambush in Haiti in 1915. He was nominated for (but not awarded) an unprecedented third medal in World War I for his valor at Belleau Wood, where he led a charge against the German stronghold with the battle cry, “Come on you sons of bitches, do you want to live forever?” This first full-length biography presents a detailed examination of a Marine Corps legend.

Charley Roberts is a journalist and military historian. He has been an investigative reporter and state capital correspondent for the Orange County Register and Washington bureau chief and executive editor of the Los Angeles Daily Journal. He lives in Roseville, California.

“While there has been much written about Sergeant Major Dan Daly, I can’t imagine a book more detailed or well-researched.”—Michael Archer, military historian, 2019 winner of the Marine Corps Heritage Foundation’s Col. Joseph Alexander Award for biography 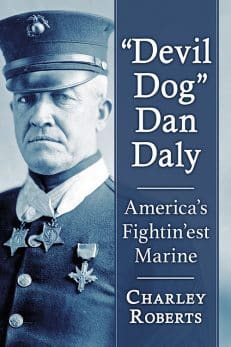