As governor of Rhode Island, J. Howard McGrath oversaw the passage of social legislation aimed at improving the lives of his constituents during the dark days of World War II. As a Rhode Island senator he served as the Democratic National Committee Chairman during the contentious 1948 presidential election, when few believed Harry Truman could defeat New York governor Thomas R. Dewey.
Following Truman’s victory, McGrath could easily have written his own ticket to further political success—but his career was cut short in 1952 when he was forced to resign as Attorney General amid a cloud of scandal. This biography traces the rise and fall of a politician who achieved notable success yet ultimately fell victim to his appetite for power, fame and fortune.

Debra A. Mulligan is an associate professor at Roger Williams University, and has taught a variety of courses in East Asian, American, and European history. She serves on the national advisory board for the history honor society, Phi Alpha Theta, and is also on the board of directors for the Rhode Island Hall of Fame. She lives in Warren, Rhode Island. 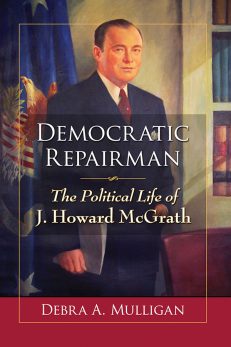