Defense Relations Between the United States and Vietnam

Although the hostilities of the Vietnam War ended in 1975, the diplomatic repercussions lasted for several more decades. Eventually, however, the dedicated perseverance of diplomats on both sides paid off. In November 2003, Major General Pham Van Tra, defense minister of the Socialist Republic of Vietnam, met with U.S. defense secretary Donald Rumsfeld in the halls of the Pentagon, signaling a new era in U.S.–Vietnamese defense relations.
This book traces the development of that relationship in the years since the Vietnam War. It focuses especially on the 1990s, a decade in which the author served as country director for Indochina, Thailand and Burma in the Office of the Assistant U.S. Secretary of Defense for International Security Affairs. His experience adds a personal perspective to the historical and political record. Multiple facets of the relationship between the two countries are addressed, including trade, immigration of Amerasian children, and POW-MIA concerns. Through this honest depiction of the sometimes fractious and confusing policy-making process, Stern shows how both parties came to agree, in the words of Major General Tra, that we “should not allow the future to repeat the past.”

“should be required reading for every advanced class in international relations…meticulous”—Foreign Service Journal. 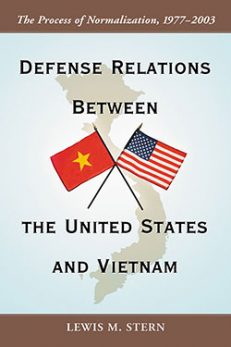 You're viewing: Defense Relations Between the United States and Vietnam $39.95
Add to cart