A 20-Year Conversation with Men in America’s Prisons

More than two million people are incarcerated in America’s prisons—one in nine is serving a life sentence. Mass long-term imprisonment devours state budgets, adversely affects community well-being and skews our collective moral compass. This study examines the human costs of keeping the convicted out of sight, out of mind.
Beginning in 1994, the author began recording the personal stories of 50 incarcerated felons—17 of them were still in prison 20 years later. The men candidly discuss what it means to commit a serious crime and to be confined for perhaps the remainder of their lives. Their stories are balanced by conversations with correctional officers, prison administrators, chaplains and parole board members. The author identifies circumstances that ruin some prisoners and save others and presents insights for possible improvements in the criminal justice system.

Gaye D. Holman is a retired professor of sociology. For several decades she taught within correctional facilities in the Louisville, Kentucky, area and coordinated her college’s degree program there. She remains involved in efforts in Louisville to help ex-offenders re-enter society.

One—“I’m weary all the time”: An Introduction to the Men 11

Two—“Gnaws at your heart like a worm”: The Emotional Impact of Incarceration 20

Three—In the Belly of the Beast: Entering Prison 36

Five—In the Lion’s Mouth: Crime and ­Rule-Breaking Within the Walls 60

Six—Power, Respect and the Convict Code: Surviving Behind Bars 73

Seven—The Past That Clings to Them: Scars of Child Abuse and Neglect 86

Nine—Two Sides of a Coin: The Man and His Crime 114

Twelve—End of the Journey: Illness and Death in Prison 165

Thirteen—The Patterns of Change: Results of the Study and Suggestions for Improvement 176

﻿“Conversations are deeply personal, covering marriage and death in prison…addresses the long-term consequences of extended incarceration…. A candid, engaging, and fascinating read for those interested in criminal justice, criminology, and prison reform”—Booklist. 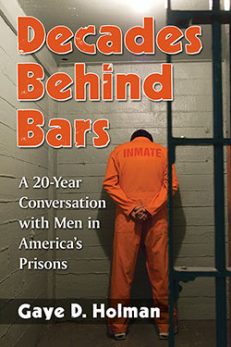 You're viewing: Decades Behind Bars $29.95
Add to cart