Death on the Small Screen

The Psychology of Viewing Violent Television

Mortality remains a taboo topic in much of Western society, but death and violence continue to be staples of popular television. We can better understand the appeal of violence by investigating psychological theories surrounding anxiety about death and the defenses we use to manage that anxiety. This book examines five recent television series—Game of Thrones,The Punisher, Jessica Jones, Sons of Anarchy and Hannibal—and shows how fictional characters’ motivations teach viewers about both the constructive and destructive ways we try to deal with our own mortality.
Instead of dismissing violent television as harmless entertainment or completely condemning it as a dangerous trigger of hostile behavior, this book shows its effects on viewers in a more nuanced manner. It provides a new perspective on the enjoyment of violent television, enhancing fans’ appreciation and sparking ongoing discussions about their value to both the individual and society.

Jonathan F. Bassett, PhD is a professor of psychology at Lander University in Greenwood, South Carolina, where he teaches courses on death and dying. His research focuses on the application of existential psychology, especially Terror Management Theory, to the analysis of popular culture in the areas of literature, television and movies.

Acknowledgments v
Preface 1
Introduction 3
1. Dying to Watch: The Role of Death Anxiety in the Appeal of Fictional Violence 17
2. The Paramount Place of Death in Human Psychology: An Overview of Terror Management Theory 41
3. Applying TMT to Illumine the Motives for and Reactions to Fictional Violence 55
4. There Is Only One Thing We Say to Death—Not Today: Battling Existential Terror in HBO’s Game of Thrones 76
5. Death-Denying (Super)heroism: Gender, Trauma, and Violence in Marvel’s The Punisher on Netflix 96
6. Death-Confronting (Super)heroism: Facing Existential and Social Problems in Marvel’s Jessica Jones on Netflix 113
7. Moral and Existential Dilemmas and the Quest for Death Transcendence in the FX Television Series Sons of Anarchy 133
8. Giving Voice to the Unmentionable: The Appeal of Transcending Mortality and Corporeality in the NBC Television Series Hannibal 151
Final Thoughts 171
References 185
Index 203 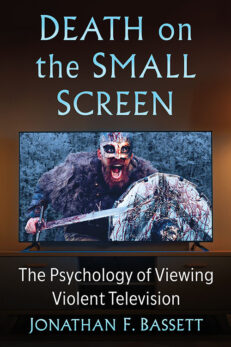 You're viewing: Death on the Small Screen $55.00
Add to cart