Cubans in the Confederacy

The role of Cubans in the American Civil War is seldom appreciated. This work is the first to provide a close look at the often distinguished services they performed. Although Cubans are recorded in the rosters of both Union and Confederate forces, Cuban ties with the Confederacy were particularly strong, partly because Cuban patriots fighting for liberation from Spain tended to identify with the Southern cause as a revolutionary struggle.
This work will focus on the biographies of three Cubans who served the Confederate army in the War Between the States. Darryl E. Brock offers a detailed portrait of José Agustín Quintero, who served as the South’s most effective diplomat. Michel Wendell Stevens writes on Ambrosio José Gonzales, who rose to the rank of colonel and served some of the Confederacy’s best-known generals. Finally, Richard Hall provides an intimate sketch of Loreta Janeta Velazquez, a soldier and spy for the Confederacy who infiltrated (as a double agent) the operations of Northern spymaster Lafayette C. Baker.

Phillip Thomas Tucker is a former Department of Defense historian in Washington, D.C. He lives in Davenport, Florida. 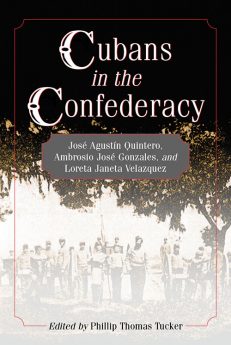 You're viewing: Cubans in the Confederacy $29.95
Add to cart