A History and Discography

Henry Mancini’s Peter Gunn theme. Lalo Schifrin’s Mission: Impossible theme. John Barry’s arrangement of the James Bond theme. These iconic melodies have remained a part of the pop culture landscape since their debuts in the late 1950s and early ’60s: a “golden decade” that highlighted an era when movie studios and TV production companies employed full orchestral ensembles to provide a jazz backdrop for the suspenseful adventures of secret agents, private detectives, cops, spies and heist-minded criminals. Hundreds of additional films and television shows made during this period were propelled by similarly swinging title themes and underscores, many of which have (undeservedly) faded into obscurity. This meticulously researched book traces the embryonic use of jazz in mainstream entertainment from the early 1950s—when conservative viewers still considered this genre “the devil’s music”—to its explosive heyday throughout the 1960s. Fans frustrated by the lack of attention paid to jazz soundtrack composers—including Jerry Goldsmith, Edwin Astley, Roy Budd, Quincy Jones, Dave Grusin, Jerry Fielding and many, many others—will find solace in these pages (along with all the information needed to enhance one’s music library). The exploration of action jazz continues in this book’s companion volume, Crime and Action Jazz on Screen Since 1971.

Derrick Bang has written film, television, music, and general entertainment commentary for magazines and local newspapers since 1974, and supplies regular columns and features to The Davis Enterprise. He lives in Davis, California.

• “Excellent…intriguing…Bang’s writing style is clear and engaging throughout, and the chosen selections are often revelatory. In fact, this reviewer found himself wanting to go and grab many a score being discussed, and/ or make a list of great films to revisit, or television shows to track down and binge watch. Well researched…Bang’s enthusiasm for the topic shines forth throughout.”—Film Score

• “A valuable (and rather wittily written) find for all fans of spy movies [and] jazz buffs”—popcultureshelf.com

• “For those of us who love music for media, both volumes are a must!”—Association for Recorded Sound Collections Journal 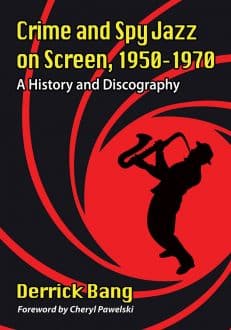