Count Dracula Goes to the Movies

First published in 1897, Bram Stoker’s Dracula has never been out of print. Yet most people are familiar with the title character from the movies. Count Dracula is one of the most-filmed literary characters in history—but has he (or Stoker’s novel) ever been filmed accurately?
In its third edition, this study focuses on 18 adaptations of Dracula from 1922 to 2012, comparing them to the novel and to each other. Fidelity to the novel does not always guarantee a good movie, while some of the better films are among the more freely adapted.
The Universal and Hammer sequels are searched for traces of Stoker, along with several other films that borrow from the novel. The author concludes with a brief look at four latter-day projects that are best dismissed or viewed for ironic laughs.

• “Presents a compendium of the most important Dracula film adaptations”—ProtoView

• “An interesting addition to the literature”—ARBA

• “Excellent…an overview like this one shows how a particularly powerful myth can survive in a variety of cultures, on both the page and screen”—Video Watchdog

“Joslin writes in an accessible and entertaining style”—Scarlet Street

“explores more than two dozen vampire movies, especially those based directly on the novel”—Houston Chronicle

“exhaustively researched and richly detailed. If you love vampires, vampire movies, Dracula or Stoker’s novel, this comprehensive and definitive book belongs on your bookshelf”—Access Texas 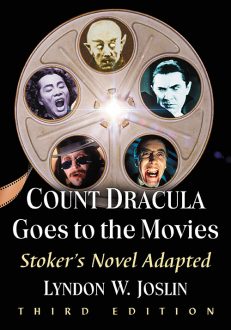 You're viewing: Count Dracula Goes to the Movies $39.95
Add to cart