A Critical History of Police Dramas on Television

From cops who are paragons of virtue, to cops who are as bad as the bad guys…from surly loners, to upbeat partners…from detectives who pursue painstaking investigation, to loose cannons who just want to kick down the door, the heroes and anti-heroes of TV police dramas are part of who we are. They enter our living rooms and tell us tall tales about the social contract that exists between the citizen and the police. Love them or loathe them—according to the ratings, we love them—they serve a function. They’ve entertained, informed and sometimes infuriated audiences for more than 60 years.

This book examines Dragnet, Highway Patrol, Naked City, The Untouchables, The F.B.I., Columbo, Hawaii Five-O, Kojak, Starsky & Hutch, Hill Street Blues, Cagney & Lacey, Miami Vice, Law & Order, Homicide: Life on the Street, NYPD Blue, CSI, The Shield, The Wire, and Justified.
It’s time to take another look at the “perps,” the “vics” and the boys and girls in blue, and ask how their representation intersects with questions of class, gender, sexuality, and “race.” What is their socio-cultural agenda? What is their relation to genre and televisuality? And why is it that when a TV cop gives a witness his card and says, “call me,” that witness always ends up on a slab?

Roger Sabin is a professor of popular culture at Central Saint Martins, University of the Arts London. He has written several books, and reviews for the international press. He lives in London, United Kingdom.

Ronald Wilson is a lecturer at the University of Kansas where he teaches courses on film genre and theory. He is the author of a book about the gangster film. He lives in Lawrence, Kansas.

Brian Faucette lectures at Caldwell Community College and Technical Institute in North Carolina and specializes in representations of masculinity. He lives in Hudson, North Carolina.

Ben Bethell is an associate lecturer at the University of the Arts London. He lives in London, United Kingdom.

“smart and informative…valuable…excellent”—Classic Images; “thoughtful overview of the history of police dramas”—HARTS & Minds: The Journal of Humanities and Arts. 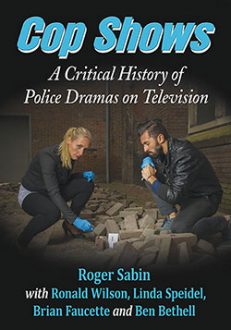