The Cholera Epidemic and the Threat of the Polish Uprising

In 1831, Prussia was consumed by two fears: the possibility of revolution resulting from the 1830 November Uprising of Poland against Russia, and a looming cholera epidemic. As the contagion made its way across Russia, Prussian medical officials took note and prepared to respond to what they thought was a highly contagious disease. When it spread to Poland, Prussia instituted a strict quarantine policy on its border, inhibiting Prussian support of the Russian war effort in Poland. From the Polish perspective the quarantine was seen as a deliberate act of sabotage against the revolution, an attempt to cut off trade with the West.

This book examines the Prussian government’s strict health policy and its consequences, including social unrest and resulting public health reforms. Polish public health policy is investigated in light of the revolutionary government’s needs. Information is provided on the cholera camps established by Prussia to quarantine Polish soldiers who crossed the border as refugees in July 1831, the height of the cholera fear in Prussia.

“Ross should be commended for this meticulously researched, carefully planned, and intelligently executed treatise…. He breaks new ground as a historian, expounding the contemporary Prussian situation in fine detail and with rigorous documentation”—Watermark: The Newsletter of the Archivists and Librarians in the History of the Health Sciences. 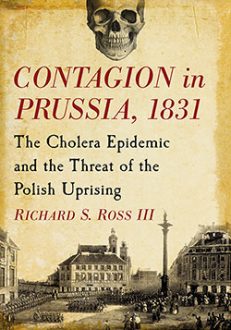