More than a century ago, the Philadelphia Athletics enjoyed a glorious five-season run under legendary manager Connie Mack, winning three World Series and four pennants from 1910 through 1914. A’s stars such as Hall of Famers Eddie Plank, Eddie Collins, Albert “Chief” Bender and Frank “Home Run” Baker are well known among baseball aficionados—and this book reveals more about their lives and careers. Mack’s pivotal role in founding the team and building it into a successful franchise—before he shocked the sports world by dismantling it—is covered, along with the advent of the all-but-forgotten Federal League.

Lew Freedman is a long-time, prize-winning journalist for such newspapers as the Philadelphia Inquirer, Chicago Tribune and Anchorage Daily News. Specializing in sports and the outdoors, he has written more than 100 books. He lives in Columbus, Indiana. 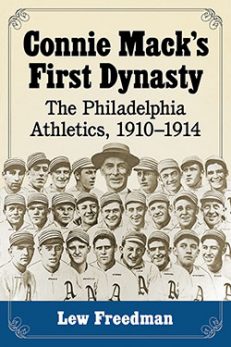