This narrative history of minor league football teams in Connecticut in the 1960s and 1970s is based on extensive newspaper and periodical research and interviews with nearly 70 former players, broadcasters and journalists. Only a few players—like Marv Hubbard, Lou Piccone and Bob Tucker—made it to the NFL, but many more played for as little as $25 per game in their quest to make it big or just have fun. Wealthy men like Pete Savin and Frank D’Addario owned teams in Hartford and Bridgeport.
In the days before cable television saturated the media with live sports, small town fans turned out to support their local heroes, often men who worked on construction crews during the week and stopped by the diner Sunday morning to talk football. Now in their 60s, 70s and 80s, these men share their stories of a simpler era; the good times, like the Hartford Knights’ 1968 ACFL championship season, and the long bus rides and missed paydays that were as much a part of minor league ball as first downs and interceptions.

William J. Ryczek is a finance professional from Wallingford, Connecticut, who writes about early baseball, football, the Yankees, and the Mets.

8. Two Steps from the Major Leagues: The Meriden Shamrocks and New Britain Bees  116

11. The Championship Team: The Right Place at the Right Time  179

Appendix: Scores and Records by Season  351 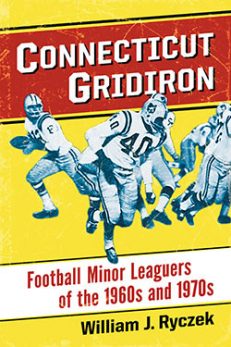