During the American Civil War, songs united and inspired people on both sides. The North had a well-established music publishing industry when the war broke out, but the South had no such industry. The importance of music as an expression of the South’s beliefs was obvious; as one music publisher said, “The South must not only fight her own battles but sing her own songs and dance to music composed by her own children.” Southern entrepreneurs quickly rose to the challenge.
This reference book is distinguished by three major differences from previously published works. First, it lists sheet music that is no longer extant (and listed nowhere else). Second, it gives complete lyrics for all extant songs, a rich source for researchers. And third, a brief historical background has been provided for many of the songs. Each entry provides as much of the following as possible (staying faithful to the typography of each title page): the title as published, names of all lyricists, composers and publishers; dates of publication; cities of publication; and if applicable, the names of catalogs or magazines in which the song appeared. Music published in Southern cities under Federal occupation is excluded.

E. Lawrence Abelis an emeritus professor at Wayne State University in Detroit. He is the author of more than forty books and his articles have been published in various popular and scholarly magazines and journals. 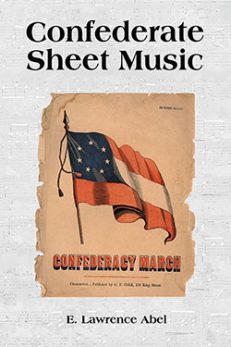