This companion to Victorian popular fiction includes more than 300 cross-referenced entries on works written for the British mass market. Biographical sketches cover the writers and their publishers, the topics that concerned them and the genres they helped to establish or refine. Entries introduce readers to long-overlooked authors who were widely read in their time, with suggestions for further reading and emerging resources for the study of popular fiction.

Kevin A. Morrison is provincial chair professor, university distinguished professor, and professor of British Literature in the School of Foreign Languages at Henan University, Kaifeng, China.

• “Morrison collects in this volume more than 300 cross-referenced entries on mass-market British fiction published in the latter half of the 19th century. While similar, earlier works exist the focus on popular fiction is an important distinction…points to key changes in the Victorian literary landscape…there are sections addressing topics concerning the writes themselves. These are especially helpful in contextualizing subjects within the given period, which can be significantly different from how they’re viewed today…recommended”—Library Journal

• “Common themes in Victorian popular fiction, from bigamy and vivisection to masculinity and motherhood, are explored in historical context. An extensive list of works cited and consulted appears at the end of the volume. Recommended”—Booklist

• “Weaves together an alphabetical listing of entries to create a literary and social narrative that bridges the gap between the Victorian Era and the students’ present, making this guide a welcome addition to any library’s shelves.”—ARBA

• “Alphabetically organized entries on a miscellany of topics; one may find items not available elsewhere”— Studies in English Literature 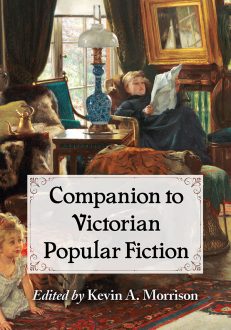 You're viewing: Companion to Victorian Popular Fiction $45.00
Add to cart