All National and Conference Winners Through 2010

Each year, more than 575 awards and trophies are presented to college football players and coaches around the country. This comprehensive reference offers detailed descriptions of each of these awards followed by a full list of winners through 2010. All levels of competition are covered, including the NCAA Football Bowl Subdivision, NCAA Football Championship Subdivision, NCAA Division II, NCAA Division III, NAIA, NCCAA and community and junior college championships. From major honors like the Heisman Trophy, to level-specific awards such as the NCAA Division I Lou Groza Award, to conference prizes like SEC Offensive Player of the Year, this work celebrates the highest accolades of college football and the talented men upon whom they have been bestowed.

Dave Blevins, a full-time writer, is the author of several books. He served in the United States Air Force as a linguist and instructor and lives in Las Vegas, Nevada. 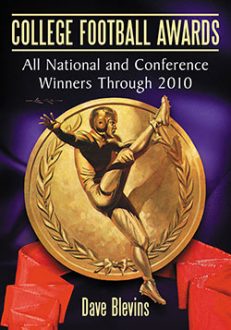