BACK ISSUE
This is a single back issue only. To order a current subscription, or for more information, please visit the journal’s web page at CluesJournal.com. Back issues from earlier volumes of Clues are available for order subject to availability.  Also, single issues of the current volume may be ordered one at a time. Individuals may order back issues directly from our online catalog, and the charge for individuals is $30 (excluding postage). Issues from Volume 33 to the present are also available in ebook format on Kindle, Nook and Google Play. The charge for single issues for institutions is $75 per issue (excluding postage). If your institution requires a back issue, please contact us to order at the appropriate rate.

Executive editor Janice M. Allan is a senior lecturer in English studies in the School of English, Sociology, Politics & Contemporary History at the University of Salford in England.

Murder, Mayhem, and Madness: John Dickson Carr’s Gothic Detective Stories (Stefano Serafini) 23
This essay investigates the contact zones between gothic and detective fiction within the early work of the significant yet largely neglected author John Dickson Carr. By revealing the transgressive and contaminated character of his narratives, this essay also provides a more nuanced picture of interwar ­crime-writing, the literary boundaries of which were constantly violated and renegotiated.

The Cowboy and the Detective: The Case of Craig Johnson (Antoine Dechêne) 33
This essay focuses on Craig Johnson’s charismatic protagonist Walt Longmire, the county sheriff of Absaroka, Wyoming. A ­cowboy-detective par excellence, Longmire embodies the interrelationship between the Western and detective fiction while offering a good example of “glocal literature”—that is, a form of literature that is both global and local.

James Church’s A Corpse in the Koryo and His Inspector O Series: A Noir/Spy Thriller Hybrid Set in North Korea (David C. Wright Jr.) 40
Analysis of A Corpse in the Koryo, the first book in the Inspector O series by James Church, shows that this series featuring a North Korean detective constitutes a successful genre hybrid: a ­hard-boiled detective thriller, à la Raymond Chandler, combined with a spy novel in the style of John le Carré.

Laughter in Crime: The Mechanics of Laughter in Janet Evanovich’s Stephanie Plum Series (Solange ­Garnier-Fox) 50
The author examines how Janet Evanovich’s Stephanie Plum series works alongside ­hard-boiled and ­soft-boiled conventions to create a hybrid formula of genres seemingly at odds with detective fiction. By infusing romance, adventure, and comedy in the detective genre, Evanovich creates a new female agency and rewrites US founding myths of the pursuit of happiness and ­self-realization.

(Super)Natural Healing in Juliet Blackwell’s Haunted Home Renovation Series (Rachel Schaffer) 60
The ability of Juliet Blackwell’s accidental sleuth, builder Mel Turner, to communicate with ghosts make her an effective healer of historic homes and their past and present residents. Blackwell’s series effectively combines elements of the mystery and supernatural genres to showcase Mel’s ability to tell the stories and heal the trauma of both the living and the dead.

“Darkness Speaks”: Blending Domestic Noir, Trauma, and Horror in Minette Walters’s The Cellar (Charlotte Beyer) 69
When Minette Walters’s The Cellar was published in 2015, reviewers expressed shock and abhorrence at the novel’s graphic portrayals. The author’s analysis focuses on the novel’s trauma narrative and use of domestic noir to critique the patriarchal family, and interrogates the trafficking victim’s experience through horror and the paranormal.

Dirty Pretty Things: Female Trauma, ­Self-Mutilation, and Random Acts of Violence in Gillian Flynn’s Sharp Objects (Malinda K. Hackett) 80
The author examines Gillian Flynn’s novel Sharp Objects within the context of domestic noir and trauma theory. Drawing on the work of both Cathy Caruth and Ann Whitehead, the author contends that the women who inhabit the domestic space of Flynn’s narrative partake in performative acts of pathology to reject notions of idealized femininity, beauty, and motherhood.

Seeking a Solution to the End of the World: Genre Hybridity, Closure, and Mourning in Apocalyptic Detective Fiction
sarah france 100
This essay looks to Ben H. Winters’s The Last Policeman (2012) and Hanna Jameson’s The Last (2019) as examples of apocalyptic detective fiction. Here, the generic expectation of detective closure is frustrated by a secular apocalypse, articulating an attempt but ultimately a failure to adequately mourn a future apocalyptic event.

Author Guidelines are on page 130. 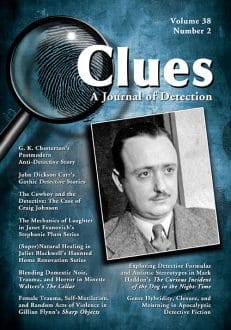