BACK ISSUE
This is a single back issue only. To order a current subscription, or for more information, please visit the journal’s web page at CluesJournal.com. Back issues from earlier volumes of Clues are available for order subject to availability.  Also, single issues of the current volume may be ordered one at a time. Individuals may order back issues directly from our online catalog, and the charge for individuals is $30 (excluding postage). Issues from Volume 33 to the present are also available in ebook format on Kindle, Nook and Google Play. The charge for single issues for institutions is $75 per issue (excluding postage). If your institution requires a back issue, please contact us to order at the appropriate rate.

Executive editor Janice M. Allan is a senior lecturer in English studies in the School of English, Sociology, Politics & Contemporary History at the University of Salford in England.

Bending the Genre: Portraying the Genders of Harriet Vane and Lord Peter Wimsey in the Detective Fiction of Dorothy L. Sayers
Sally ­Beresford-Sheridan 19
This essay explores how the fictional female detective of Dorothy L. Sayers works outside normative gender conventions of the interwar years. By positing a female character who can become a detective, Sayers allows both Harriet Vane and Peter Wimsey to break and redefine social expectations of masculine behaviors, feminine behaviors, and gender stereotypes.

Cherchez la Femme: A Good Woman’s Place in ­Hard-Boiled Detective Fiction
Keli Masten 29
Hard-boiled detective fiction often limits women to the roles of femme fatale or love interest of the detective. However, Effie Perine (Dashiell Hammett’s The Maltese Falcon) and Anne Riordan (Raymond Chandler’s Farewell, My Lovely) embody the femme fiable (“dependable woman”), a survivor who goes where the detective cannot and avoids the fate of the femme fatale.

The Loaded Gun: Idiomatic Language in the Works of Raymond Chandler and Ross Macdonald
Susan Rosalsky 40
This essay explores the idiomatic writing styles of Raymond Chandler and Kenneth Millar (aka Ross Macdonald), discussing the importance of vernacular speech for establishing the credibility of the private eye and constructing a community of readers.

Bloody Patterns: Shades of Myth and the Limits of Reason in A Study in Scarlet
Martin Rosenstock 49
Arthur Conan Doyle’s A Study in Scarlet (1887), which introduces Sherlock Holmes, is a famously disjointed narrative yet provides a compelling detective story. One strategy employed to create a sense of cohesion is to adapt structures and themes from romance and, in particular, myth. Conan Doyle’s work here appears to prefigure characteristics of high modernist texts.

The “Arcadian Past” in Kate Atkinson’s Started Early, Took My Dog
Renée Pigeon 60
In the Jackson Brodie crime novel Started Early, Took My Dog, Kate Atkinson contrasts acts of intervention to achieve justice with nostalgia for the past as a lost Arcadia, making ironic use of motifs and narrative structures from classical romance to subvert certain conventions of traditional crime fiction.

Charles McCarry’s Recursive Late Fiction
Robert Lance Snyder 71
Among the 14 works of Charles McCarry are the strikingly recursive novels The Shanghai Factor (2013) and The Mulberry Bush (2015). Although neither of these novels is postmodern in terms of narrative technique, their epistemic aporias involving both ­state-sponsored campaigns of secrecy and the literary reconstructions that profess to unmask them reflect postmodern skepticism.

Horror and the Big Elsewhere: Traumatic Enjoyment in Event Horizon and True Detective
Matthew Chabin 82
This essay offers a Lacanian perspective on contemporary horror, science fiction, and detective fiction in film and television. Two examples of hybrid works, Paul W. S. Anderson’s Event Horizon (1997) and the HBO series True Detective (2014), are analyzed in detail. The theories of Robin Wood and Margaret Tarratt are expanded within a Lacanian framework to advance a new understanding of the interrelatedness of the three genres.

The Long Short Story: Detective Fiction in the Age of Netflix
Katherine Voyles 91
The classical pattern of detective fiction condenses extended narratives and extends condensed ones. Today’s serialized television shows, including Broadchurch, that are made for a ­binge-watching age intensifies this dynamic.

The Double Detective: Compounding Complexity in The Fade Out, a Noir Graphic Novel
Casey A. Cothran and Robert G. Prickett 102
This essay examines how the narrative structure of noir detective fiction and the medium structure of the graphic novel work together to challenge the reader in The Fade Out, a graphic novel series composed by Ed Brubaker and Sean Phillips (with colors by Elizabeth Breitweiser). 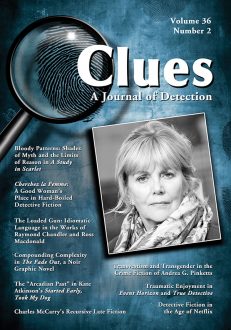